Where did all the oil go? The peak is back

Home » Where did all the oil go? The peak is back

Nafeez Ahmed writes: An extensive new analysis says that proved conventional oil reserves as detailed in industry sources are likely “overstated” by half. According to standard sources, the world contains 1.7 trillion barrels of proved conventional reserves. However, according to the new study, this official figure is almost double the real size of world reserves. 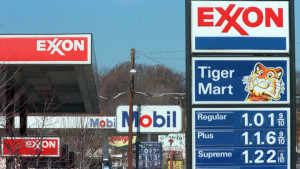 According to standard sources like the Oil & Gas Journal, BP’s Annual Statistical Review of World Energy, and the US Energy Information Administration, the world contains 1.7 trillion barrels of proved conventional reserves.

However, according to the new study by Professor Michael Jefferson of the ESCP Europe Business School, a former chief economist at oil major Royal Dutch/Shell Group, this official figure which has helped justify massive investments in new exploration and development, is almost double the real size of world reserves.

Wiley Interdisciplinary Reviews (WIRES) is a series of high-quality peer-reviewed publications which runs authoritative reviews of the literature across relevant academic disciplines.

According to Professor Michael Jefferson, who spent nearly 20 years at Shell in various senior roles from head of planning in Europe to director of oil supply and trading, “the five major Middle East oil exporters altered the basis of their definition of ‘proved’ conventional oil reserves from a 90 percent probability down to a 50 percent probability from 1984. The result has been an apparent (but not real) increase in their ‘proved’ conventional oil reserves of some 435 billion barrels.”

Global reserves have been further inflated, he wrote in his study, by adding reserve figures from Venezuelan heavy oil and Canadian tar sands – despite the fact that they are “more difficult and costly to extract” and generally of “poorer quality” than conventional oil. This has brought up global reserve estimates by a further 440 billion barrels.

Jefferson’s conclusion is stark: “Put bluntly, the standard claim that the world has proved conventional oil reserves of nearly 1.7 trillion barrels is overstated by about 875 billion barrels. Thus, despite the fall in crude oil prices from a new peak in June, 2014, after that of July, 2008, the ‘peak oil’ issue remains with us.”

Earlier this year, Deloitte predicted that over 35 percent of independent oil companies worldwide are likely to declare bankruptcy, potentially followed by a further 30 percent next year – a total of 65 percent of oil firms around the world.

Already 50 North American oil producers have gone bankrupt since last year due to a crisis of profitability triggered by bottoming oil prices.

The industry is also under pressure due to the growing recognition that a large portion of fossil fuels are merely “stranded assets” that must be kept in the ground to avoid dangerous climate change.

The new study will place even more pressure on the oil industry with the confirmation from a former senior oil major executive that about half of global “proved” conventional reserves are not merely “stranded”, but do not even exist.

The implication is that a vast quantity of investment into the oil industry will never be able to produce sufficient returns, as it has been justified by assets whose value is vastly exaggerated.

Contradicting the official position of most of the oil industry, Jefferson cites a number of recent scientific studies, according to which “the evidence suggests that the global production of conventional oil plateaued and may have begun to decline from 2005”.

Jefferson believes that a nominal economic recovery, combined with cutbacks in production as the industry reacts to its internal crises, will eventually put the current oil supply glut in reverse. This will pave the way for “further major oil price rises” in years to come.

However, by the time it takes for another oil price spike to arrive, the current spate of bankruptcies could escalate to the point that continued oil industry investment is no longer financially viable.

According to another peer-reviewed study released in March in Energy Policy by two scientists at Texas A&M University, “Non-renewable energy” – that is “fossil fuels and nuclear power” – “are projected to peak around mid-century”, with or without climate mitigation policies.

But the paper adds that to avoid a rise in global average temperatures of 2C, which would tip climate change into the danger zone, 50 percent or more of existing fossil fuel reserves must remain unused.

The Texas A&M scientists conclude that by century’s end, the demise of fossil fuels is going to happen anyway, with or without considerations over climate risks:

“… the ‘ambitious’ end-of-century decarbonisation goals set by the G7 leaders will be achieved due to economic and geologic fossil fuel limitations within even the unconstrained scenario in which little-to-no pro-active commitment to decarbonise is required… Our model results indicate that, with or without climate considerations, RES [renewable energy sources] will comprise 87–94 percent of total energy demand by the end of the century.”

While a 37-fold annual rate of increase in the renewable energy supply seems herculean by any standard, some analysts believe the track record of solar power shows it could happen even faster.

To date, solar power has experienced an exponential growth rate, consistently outpacing conventional linear projections. While solar power generation has doubled every year for the last 20 years, with every doubling the production costs of solar photovoltaic (PV) has dropped by 22 percent.

Tony Seba, a lecturer in business entrepreneurship, disruption and clean energy at Stanford University, says that if this trend continues, the growth of solar is already on track to go global. With just eight more doublings, by 2030 solar power would be capable of supplying 100 percent of the world’s energy needs.

This means that even if Seba’s projections are overestimated by half, the target of 50 percent renewables by 2028 to avoid a 2C world appears to be achievable.

Nevertheless, a wealth of scientific data suggests that 2C is not a realistic safe target. As former NASA chief climate scientist James Hansen among others have warned, this level of warming could result in disintegration of polar ice sheets leading to “several metres” sea level rise within this century, putting cities like London and New York underwater.

Whether or not such warnings will be enough to spur investors to pull out of the fossil fuel industries, it is the bottom line: the latest revelations on the fundamentally uneconomic nature of these investments could accelerate the inevitable transition to our post-carbon future.

– Nafeez Ahmed PhD is an investigative journalist, international security scholar and bestselling author who tracks what he calls the ‘crisis of civilization.’ He is a winner of the Project Censored Award for Outstanding Investigative Journalism for his Guardian reporting on the intersection of global ecological, energy and economic crises with regional geopolitics and conflicts. He has also written for The Independent, Sydney Morning Herald, The Age, The Scotsman, Foreign Policy, The Atlantic, Quartz, Prospect, New Statesman, Le Monde diplomatique, New Internationalist. His work on the root causes and covert operations linked to international terrorism officially contributed to the 9/11 Commission and the 7/7 Coroner’s Inquest.


Michael Jefferson, Wiley Interdisciplinary Reviews
Against the background of IIASA’s massive (their word) ‘global energy assessment’(GEA), this paper takes a closer look at the challenges posed by population growth,energy poverty, the fossil fuels and carbon storage, renewable energy, energy effi-ciency, natural catastrophes, and potential climatic change to offer a somber,although arguably more realistic, overview of what the future may hold.


Timing of the peak all-important
Kevin Potvin, The Republic of East Vancouver
The reason there is such heated debate over when exactly peak oil is due to arrive is because, at the point of the peak, the fundamental laws of economics governing oil production, consumption, and prices, will flip over to a whole new paradigm. And because oil is very much the key commodity at the root of all economic activity in the modern industrial world, the flip-over of economic laws governing oil will deeply affect, and even potentially flip over, the fundamental economic laws governing all the world’s industrial activity.