All Roads Lead To Peak Oil

Ron Patterson writes: It is obvious to me that OPEC is producing flat out. Only Iran has potential to increase production, but that will only replace decline in other OPEC nations. OPEC production will likely hold steady for the next four or five years before starting a steady decline. It will not prevent peak oil.

I follow the JODI World Oil Database primarily because it is now four months ahead of the EIA international data base. I make some adjustments however. I use the OPEC MOMR “secondary sources” for all OPEC data where JODI also uses the MOMR but uses their “direct communication” data instead. The OPEC portion of the JODI data is “crude only” and will therefore be somewhat less than the EIA reports.

I use the Canadian National Energy Base data for Canada instead of the strange numbers JODI has for Canada. And I use the EIA data for the few small producers that JODI does not report.

With these Changes I think I have composed an excellent World Oil Database from this composite data. And with the October data just released I have composed the below charts. The data is through October and is in thousand barrels per day. 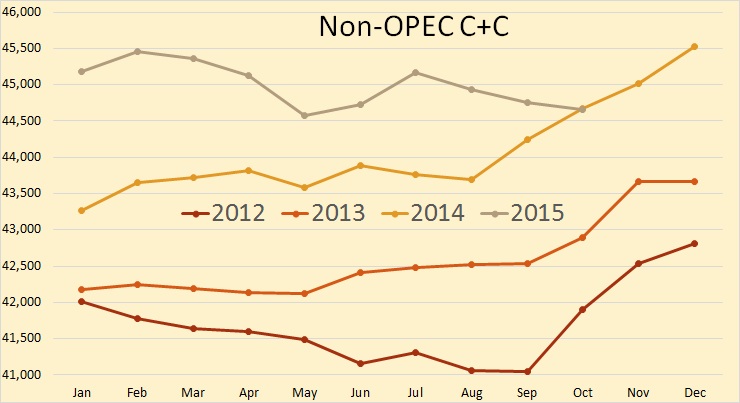 For the first time in 4 years Non-OPEC production has dropped below the level it was the same month the previous year. This means the 12 month trailing average has turned negative, though just barely. 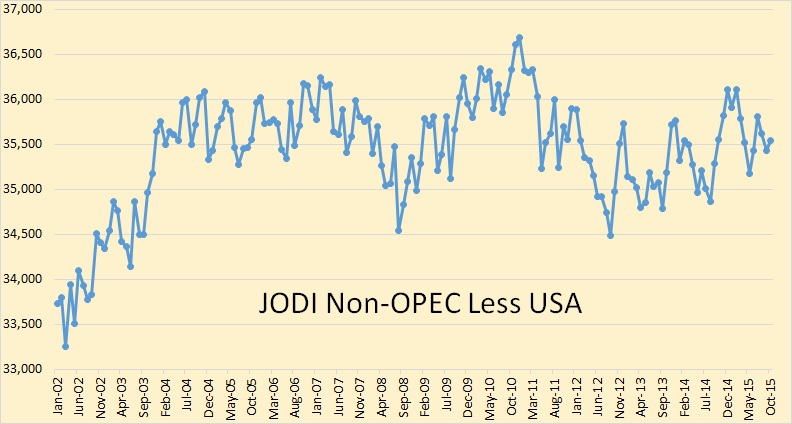 The data here, prior to 2012, is from the EIA. Russia and the USA are, by far, the two largest Non-OPEC producers. At best Russia has plateaued but most analysts predict she will begin to decline next year. I think that prognostication is correct. Russia, I believe, will slowly decline beginning in 2016. 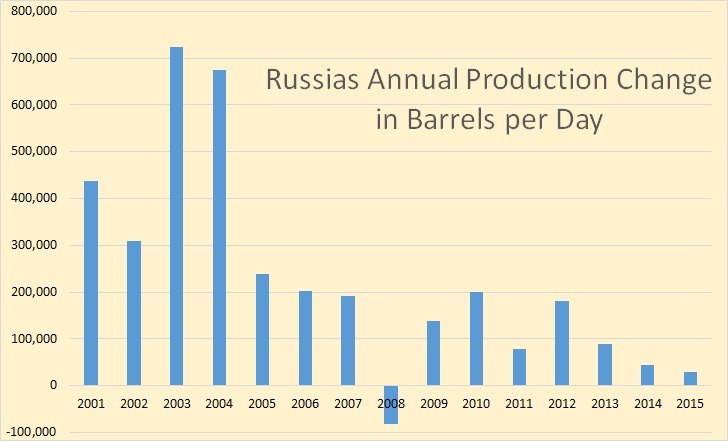 The data for 2015 is the average for the first 10 months. Russia has increased production every year since 1999 except 2008 when we had the big crash. Some were expecting a similar crash in 2015. They were surprised: Siberian Surprise. I was not and I don’t expect a crash next year either. I just expect production in 2016 to be slightly less than this year.

Non-OPEC less USA and Russia is clearly in decline. Five years of oil prices above $100 could not prevent the decline. But $100 oil has brought a lot of Non-OPEC oil on line. What it did do was prevent this decline from being a lot steeper had oil been in the $60 or below range. 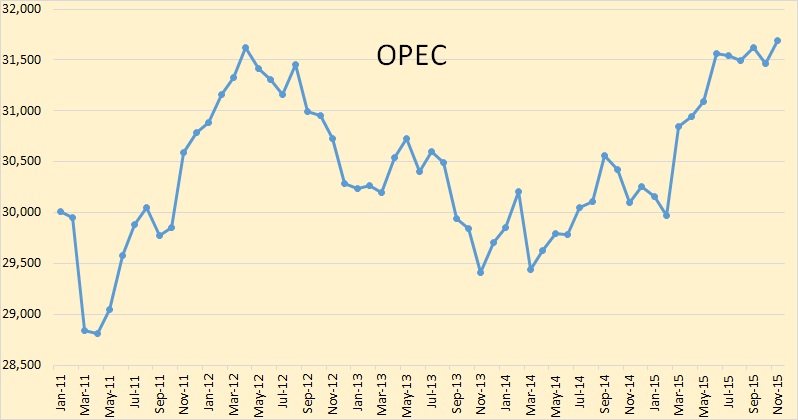 Of course if we are talking peak oil we must include OPEC. Above is OPEC crude only production through November. It is obvious, to me anyway, that OPEC is producing flat out. Only Iran has much potential to increase production. Most analysts think they can only increase production about half a million barrels per day. But that will only likely replace decline in other OPEC nations. OPEC production will likely hold steady for the next four or five years before starting a steady decline. OPEC production will not prevent peak oil.

Rockman, who posts now over on PeakOil.com, recently posted the following which I though was so clear and to the point that it deserved a post here also.

Looker: “So in fact peak oil will really bite when it is not so economically viable to find and produce oil for the market.”

Rockman replied: Good point and there’s a great visual to emphasize that point: look at the US oil production curve. We peaked about 35 years ago. And during those decades the inflation adjusted price of oil was less the current prices…and considerably less then during the height of the shale boom.

And the shales boomed when oil price boomed. And not due to technology: horizontal drilling for unconventional reservoirs, like the Austin Chalk in Texas, was well established 15 years earlier. And fracking has changed very little for decades.

In other words US oil production peaked because oil prices essentially peaked decades ago. Yes: up and down but no great movement like we saw when the shales boomed. And US oil production almost reached a new peak because oil prices reached near peak levels once again. Which means that we may not only be at global PO but the longer it takes for oil prices to significantly increase we may never again approach current production levels as depletion continues to take its toll. The recent increase in global oil production actually is the result of low oil prices…not higher. The oil price collapse has forced some producers, like the KSA, to bring their reserve capacity into play so as to increase the revenue stream. Which also means the lower oil prices are also increasing the depletion rate of existing proven reserves as well as hampering the development of new reserves.

The recent oil price collapse may eventually be viewed as the ultimate “Oh shit” moment in the global energy dynamics.

The upsurge in OPEC production that began in March 2015 is what Rockman is talking about when he says: “The recent increase in global oil production actually is the result of low oil prices…not higher.” That point should not be taken lightly. While high oil prices drove most nations to invest heavily in infill drilling and a few new fields, now that prices have collapsed they must produce every barrel possible to maintain their budgets.

Bottom line, I am more convinced than ever that 2015 will be the year world crude oil peaked.

MORE FROM RON PATTERSON
Peak Russia + Peak USA means Peak World
Ron Patterson, Peak Oil Barrel
World oil production jumped in 2011, hardly moved at all in 2013 but it was up by more than 1.5 million barrels per day in 2014. And after such a huge gain everyone and their brother were singing “peak oil is dead’. But if you scroll down through the 37 major world oil producers it becomes obvious that a majority of nations have peaked and most of them are in steep decline.

What Will 2015 Do For Peak Oil?
Ron Patterson, Peak Oil Barrel
The Cornucopians are exuberant, they believe that collapsing of oil prices dealt the death knell for peak oil. An oil glut, they say, is what we have, not peak oil. But an oil glut is exactly what we would expect at the very peak. After all, that is what peak oil is, that is the point in time when the world produces more oil than ever in history… and the most it ever will produce.

Of Fossil Fuels and Human Destiny
Ron Patterson, Peak Oil Barrel
Fossil fuel is our bamboo fruit, our mat of lichens. We, as a species, are simply behaving like all other animals have behaved and would behave under similar circumstances. Millions of years of struggling to survive has left its mark in our DNA and our species cannot help but follow where it leads us. We raise our families and seek security for them and worry about their future. But the process of natural selection has always worked within local small populations. We are molded by our DNA to worry about provisions through the next winter and to defend ourselves from a possible attack by the tribe a few miles away. The goings on in the rest of the world have never been a concern to us. But globalization has changed the nature of the game and our genes simply are not aware of that yet.