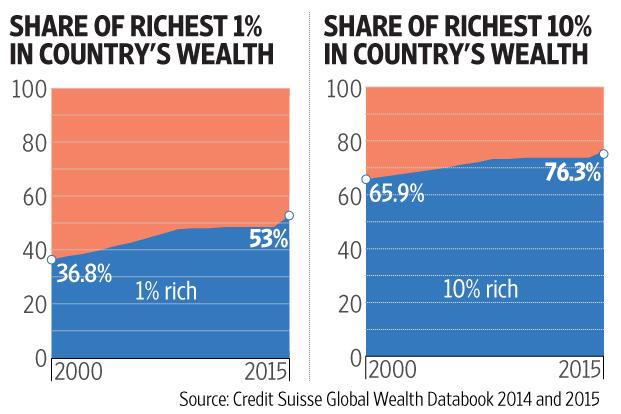 The richest 1% of Indians own 53% of the country’s wealth, according to the latest data on global wealth from Credit Suisse. The richest 5% own 68.6% of the country’s wealth, while the top 10% have 76.3%. At the other end of the pyramid, the poorer half of our countrymen jostles for 4.1% of the nation’s wealth. As Deng Xiaoping put it so pithily, “It is glorious to be rich.”

What’s more, things are getting more and more glorious for the rich. Data from Credit Suisse show that India’s richest 1% owned just 36.8% of the country’s wealth in 2000, while the share of the top 10% was 65.9%. Since then the richest have managed to steadily increase their share of the pie, as the chart shows. This happened during the years of the National Democratic Alliance (NDA) government from 2000-04, during the first United Progressive Alliance (UPA) government backed by the Left, during the second UPA tenure and now in the first year of the Modi government; the share of the top 1% has now crossed 50%. The colour of the government has been no impediment to the steady rise in the riches of the wealthy.

Explore more on the topic of Peak Oil Production here.

The share of India’s richest 1% is far ahead than that of top 1% of the US, who own a mere 37.3% of the total US wealth. But India’s finest still have a long way to go before they match Russia, where the top 1% own a stupendous 70.3% of the country’s wealth.