Scaling Success: Lessons from Adaptation Pilots in the Rainfed Regions of India 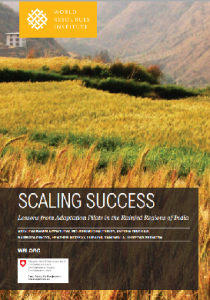 Nations around the world have recognized that the adverse effects of climate variations and change have a significant bearing on the food, water and livelihood security of millions of people. Greatest risks persist in economically less developed countries, where people’s lives and livelihoods are highly vulnerable to stressors such as erratic rainfall, droughts, floods or cyclones. The poor communities are most disadvantaged, having little capacity to cope with changing climatic conditions, due to limited financial and often also technical means. The impact of climate change will presumably be particularly severe in rainfed areas, which constitute about 80 per cent of the cultivated land, producing about 65 to 70 percent of staple foods worldwide despite unsecure water availability.

In response to such climate change related challenges, many remarkable adaptation projects are being implemented, generating widespread interest among practitioners, policy makers and development agencies. Despite the growing interest in these experiences, they often remain individual, stand-alone initiatives. The need to rapidly scale up effective climate change adaptation interventions, through favorable policy frameworks and concrete action, is widely recognized. However, the challenge that we face is in identifying the elements that are necessary for successful scaling up of adaptation interventions.

As the climate continues to change, the capacity to iteratively adjust and learn – both at the policy level and in the course of implementation will be central to adaptation success. In this context, SDC is collaborating with the World Resources Institute (WRI) and the Watershed Organisation Trust (WOTR) for an initiative on ‘Scaling up Good Adaptation Practices’ (SUGAP) in India.

This initiative was borne out of a need to understand the relevance of adaptation and resilience in the semi-arid context in India through focused case study research. The study Scaling Success: Lessons from Adaptation Pilots in the Rainfed Regions of India provides a synthesis of good practices and hands-on recommendations to practitioners, policy makers and funding agencies for identifying and scaling up effective adaptation interventions.