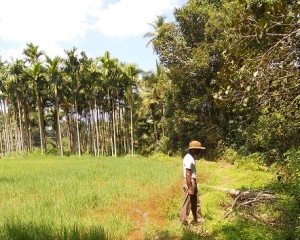 Ecologise is a programme through which those living in cities can explore living in an ecologically more sensitive and sustainable manner. Specifically, it is a programme involving stay and work on an organic farm for varying periods, as a volunteer. The programme will be preceded by a weekend orientation workshop , during which the participant may decide which farm they wish to work on, and for how long. The duration will vary according to the needs and land cycles of each farm.

There will be a few ‘break periods’ during which participants can go home or travel. It is possible that participants may not be in a position to commit for a longer period. They can still attend the orientation workshop . This workshop will also introduce the volunteer to practices one can incorporate in one’s life to live a more healthy and a less resource-intensive lifestyle.

During the programme the participants, on an average will be involved for 4 hours of manual work per day. They will have access to books and some relevant films and videos. It is expected, however, that on the whole, they will spend less time on phones/mobiles and Internet than they have been used to in their city life. Also connectivity is not very good on most farms. Be prepared for digital detoxification!

The programme does not offer fellowships nor does it expect participants to pay for their learning or stay. Any specific cash expenditure during the programme will be collectively met by the principle of ‘pay according to your ability to pay’. However, they will be expected to look after their own self-maintenance needs such as cleaning, laundry, medical needs, etc during their stay. The food arrangement will have to be worked out with each host farm, in terms of task sharing, expenses etc.

Mentoring
Mentoring will be available both at the farm level as well as during the orientation workshop . On the farms, individuals who live on the farm will act as mentors. During the orientation one young person and one senior person will guide attendees. Participants should be open, also, to learn from peasants and other people living in rural areas, including children!

How to reach Sangatya
Participants should reach Karkala and then take a bus or auto to Padya in Nakre. At Padya local people will guide to the farm. It is nearly one kilometre from Padya, up and down a small hill. In rainy season autos may not go down the hill. Budget an hour from Karkala to reach the farm.

Orientation workshop attendees may plan to reach Nakre any time on August 14 or early morning on August 15.

Book Early
The optimum number of participants is in the range of 8-12. So to avoid disappointment book early. Also August 15 is a national holiday so the trains and buses will be heavily booked. Participants and resource persons can arrive a day earlier and leave a day after. Even longer stay either way is possible if we are informed about it.