Peak Oil from the Demand Side: A Prophetic New Model

Home » Peak Oil from the Demand Side: A Prophetic New Model

The most attention-grabbing attempts to predict oil futures have come from geologists and environmental activists, who tend to look solely at production. An overlooked doctoral thesis by Christophe McGlade, Uncertainties in the outlook for oil and gas, in contrast, focuses on how both supply and demand might be constrained in the coming decades. Peak oil researchers should take note of McGlade’s thesis because he predicted, in November 2013, that oil prices would sink, and that they will stay low throughout the second half of this decade. I found this paper on Google Scholar and have no connection with the author, but I appreciate his careful consideration of peak oil arguments, and his ability to distance himself from the more narrow-minded aspects of both economic and geological thinking. Here’s a representative quote from the middle of the thesis, p. 216:

The focus of much of the discussion of peak oil is on the maximum rates of conventional oil production. Apart from issues over how this term is defined, results suggest that focussing on an exclusive or narrow definition of oil belies the true complexity of oil production and can lead to somewhat misleading conclusions. The more narrow the definition of oil that is considered (e.g. by excluding certain categories of oil such as light tight oil or Arctic oil), the more likely it is that this will reach a peak and subsequent decline, but the less relevant such an event would be.

Advocates for peak oil often try to fit oil production to a curve based solely on an idealized image of production. Indeed, when nothing unusual happens on the downslope, oil production looks like a Hubbert curve, especially on micro levels. But at the macro levels, unusual things do happen: for example, the shale boom. McGlade argues that pessimists have failed to acknowledge that now that conventional oil has reached its peak, we should not expect a smooth ride down, but rather we should expect the unexpected, such as discoveries of new methods of production or adjustments in demand. Oil production is an artificial, not a geological, process, and nothing about the way oil is produced at the macro level demands that it must look like a bell curve.

Of course it is impossible to actually know what factors will really affect demand at a global scale, but the IEA considers two central scenarios which McGlade aims to apply to the future of oil (p. 174). One is the “low-carbon scenario” (LCS), in which the world’s governments take immediate and unprecedented action to keep anthropogenic warming below 2°C. The other is the “new policies scenario” (NPS), where new policies are adopted, but are insufficient for capping the temperature rise. This is assumed by the IEA to be what current green energy policy is actually pointing towards. McGlade does not even bother to model the IEA’s “current policies scenario” (aka “business as usual”), where very little is done to stop carbon emissions. It is hard to know whether the NPS has actually been implemented by IEA member states, but we will see that the NPS is disastrous enough.

Figure 10.12: Production of oil in the United Kingdom in NPS (top) and LCS (bottom) 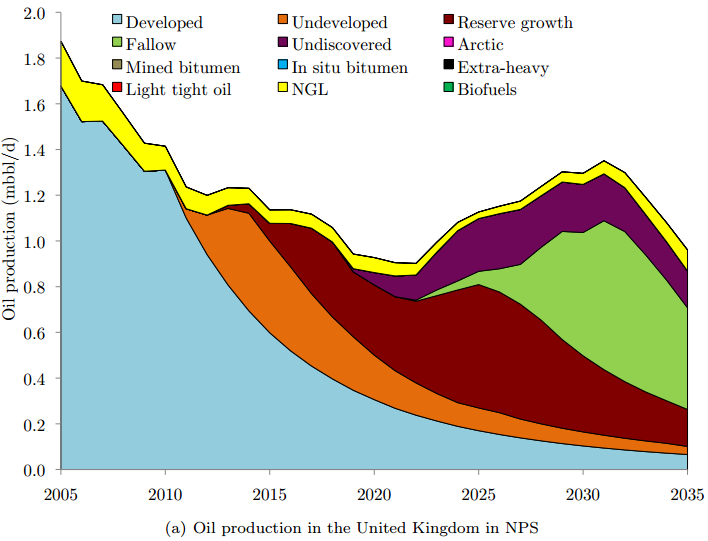 Here is a sample modeling of NPS and LCS, showing future production in Britain. Notice how much environmental policy can do to limit oil production. LCS looks a bit like a bumpy version of a Hubbert curve, while NPS, the “greenwashed business as usual” scenario, envisions the exploitation of currently unused “fallow” fields in order to feed higher demand. If we are concerned only with supply, we might glance at these graphs and assume naively that this shows a healthy supply meeting demand for both LCS and NPS. In fact this is not the case. The graph for NPS actually displays an insufficient supply for world needs. This is not the result of underestimation, either.

Here is world production for NPS. McGlade allows for very generous production increases, technological discoveries, and a long lifespan for conventional oil, which combine to produce Paul Krugman’s glorious fantasy: several decades’ worth of crude oil, biofuels, and NGL, and a gentle plateau over the years 2020-2035 with no one year that can be labeled a peak. This is the result of several upwards adjustments in McGlade’s model, including a built-in assumption that exploitation of an oil field is not a simple Hubbert curve but can be given a boost through “advanced oil recovery” (p. 232).

The initial result of McGlade’s model, in both the NPS and LCS scenarios defined above, is a prediction that oil prices will actually sink in the second half of the 2010s (p. 247). I think this is quite notable as an accurate prediction made more than a year in advance; no other model seems to have accounted for the effects of shale and tar sands on supply so successfully. However, the price numbers that begin in the 2020s are not so pleasant, and would certainly upset the likes of Krugman.

First, prices in both NPS and LCS reach a slight peak in 2012 at around $100/bbl and $90/bbl respectively before they soften throughout the remainder of the 2010s. The price in NPS drops to a minimum of $57/bbl in 2019 while a minimum of $47/bbl is achieved in LCS in the same year. This reduction in prices may well lead to a cut in production by members of OPEC, but these results suggest that there is plenty of new capacity available on a global basis to meet demand at prices well below current levels. It is important to bear in mind that this reduction occurs without light tight oil playing any major role.

Second, this period of low prices is followed by a steady, and under NPS rapid, rise in oil prices after 2020. In NPS prices more than double (rising to $160/bbl) between 2020 − 2030 and global production rises by 6 mbbl/d. After 2030, there are insufficient new projects available, even from Canadian bitumen, and so demand destruction becomes the predominant mechanism used to allow supply and demand to match, resulting in a spike in prices reaching a maximum of just under $500/bbl in the final year. Even so total production remains on a plateau. This demonstrates that while there may not be a peak in oil production prior to 2035, it does not follow that there will be sufficient capacity available to prevent a major rise in oil prices. A more restrained yet steady rise is also seen in LCS, which averages just over $100/bbl in the 2030s. 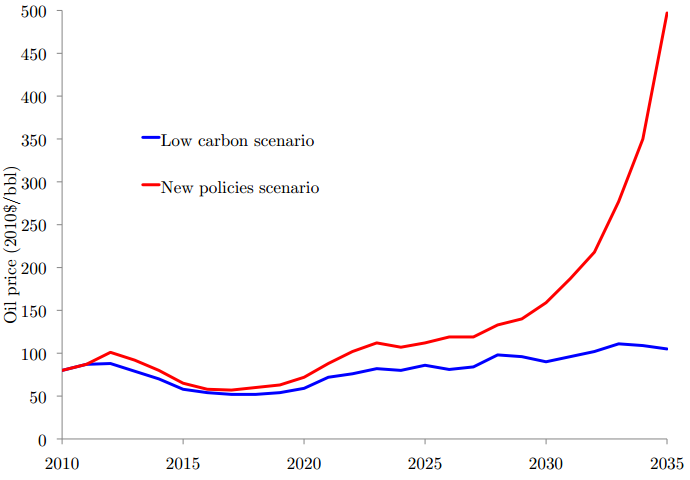 McGlade’s NPS scenario ends with the oil price literally off the charts by 2035, as can be seen in figure 10.10 above. But he predicts that this will be avoidable if the atmospheric CO₂ concentration remains on track to be below 425 ppm through 2100, with all the emissions cuts that entails. For the record: it was at 350 ppm in 1990, and is at about 400 ppm today; so the rate of increase needs to slow significantly.

In other words, the next decade of global policy, 2015-2025, will determine the difference between a comfortable energy transition in 2025-2035 and a “business as usual” that transforms rapidly into a doomsday scenario. If the news carries items about previously abandoned plays in Britain coming back online, this should be taken as a sign of desperation — it will be far better news if we have no such news. If we hit 2025 without making severe changes to our lifestyles, even the most generous scenario will allow us no more wiggle room to avoid catastrophic collapse.

MORE
View/download McGlade’s thesis:
Uncertainties in the outlook for oil and gas (pdf)

Watch a video of McGlade’s talk: Is peak oil dead?